The Golden Gate National Parks are one of our country’s boldest conservation experiments. Congress squeezed the nation’s largest urban park between some of the most expensive real estate in the country, a refuge for wildlife and city dwellers alike.

Comprised of several different land management units spanning three California counties, it is one of the most recognized and visited portions of the San Francisco Bay Area. Indeed, many of the GGNP’s lands are world-renowned destinations: from Alcatraz Island to Muir Woods, millions of visitors enter the GGNP each year to explore the Bay Area’s history, culture, and environment.

Yet there is much more to the GGNP than most visitors recognize. Congress has established an expansive legislative boundary for the Park. This legislative boundary includes all the widely recognized GGNP areas such as Mori Point, Fort Funston, Crissy Field, and the Marin Headlands, but also lands adjacent to Point Reyes National Seashore; lands the GGNP manages in cooperation with other public agencies; and even lands the GGNP doesn’t currently own or manage, but may have an option to purchase in the future. There is even a marine component, extending about 1/4 mile out to sea. Collectively, the lands within the legislative boundary are referred to as the “Golden Gate National Parks,” which is a more inclusive moniker for this unit of the National Park System. 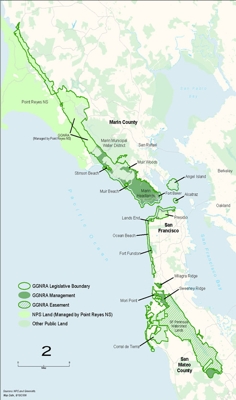 Click on the image above to view the legislative boundary for the Golden Gate National Parks.

Some of these less-recognized GGNP lands are exceptional biological resources. For example, lands adjacent to Edgewood County Park and the San Francisco Peninsula watershed lands both contain threatened and endangered species, and Angel Island and Mount Tamalpais also contain superlative biological resources. As a participant in the GGNP Endangered Species Big Year, you may explore all of these lands in your search to connect with and restore the 36 endangered and threatened species found in the Park.

Biological Diversity at the GGNP

The GGNP contains more federally protected endangered and threatened species than any other unit of the National Park System in continental North America: more than Yosemite, Yellowstone, Sequoia, and Kings Canyon National Parks combined. This is both cause for celebration and concern: Bay Area residents and the Nation are privileged to have such a diverse landscape in public ownership, but the imperiled status of so many of the GGNP’s species may indicate that we need to re-think our relationship to the Park. 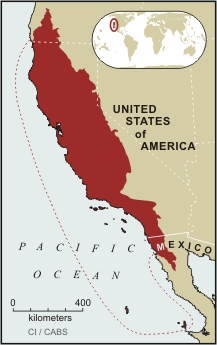 Click on the image above for more information about the California Floristic Province.

The GGNP’s proximity to the San Francisco Bay Area’s thriving civilization makes the Park’s biological diversity seem astounding. Yet in some ways it makes perfect sense. The Nature Conservancy considers the San Francisco Bay Area to be one of six biological diversity hotspots in the United States; Conservation International lists the California Floristic Province—in which the GGNP lies—as a biological diversity “hotspot,” making it one of the richest and most threatened reservoirs of plant and animal life on Earth; and the United Nations Educational, Scientific, and Cultural Organization (“UNESCO”) has made the GGNP a core component of the Golden Gate Biosphere Reserve, a status also granted to the Central Amazon Rainforests.

Environmental Justice and the GGNP

The GGNP was established during the National Park System’s “parks to the people” era of park creation, an era defined by bringing the values of the National Park System closer to where people live. During this era, some 35 years ago, our nation realized that the values preserved in the National Parks System were not reaching all of America’s communities equitably. With most national parks preserving places far from urban areas, those with the will and wherewithal to visit were primarily wealthy and white.

The National Park Service’s response to this information was, in hindsight, its first environmental justice program. The GGNP was part of this response: as explained by Congress in 1973, “many families in this urban impacted area do not enjoy the affluence which would enable them to take advantage of the outdoor recreation areas located even as close as the Point Reyes National Seashore,” and thus there was a pressing need to provide National Park values to Bay Area residents.

Today the GGNP gives people who otherwise cannot or won’t drive to Yellowstone or Yosemite National Parks an opportunity to enjoy San Francisco as interpreted by the preservationist values that are the core of the National Park System. This of course applies to those without the fiscal resources to travel to our distant National Parks, but it also provides opportunities for the over-worked and time-stressed individuals who, because of life’s daily grind, cannot scrape the time together to visit far-away places.

Click on the image above to read Dr. Roberts’ Study on Ethnic Minority Perspectives about the GGNP

The GGNP is also a hope-filled example of the transition communities can make from war and militarism to environmental protection and contemplative recreation. Much of the land that comprises the GGNP today was once used by the United States military to defend the San Francisco Bay and the Nation. The GGNP is a global model for the coming transition from militarism to environmental justice and reconciliation.

But as the GGNP’s concentration of imperiled species provides us both with hope and concern, the GGNP’s ability to operate consistent with principles of environmental justice has also been mixed. The lands chosen to be part of the GGNP largely surround wealthy communities, and historically African-American neighborhoods such as Bayview-Hunters Point have not shared equally in the environmental benefits that the park provides.

The boldness of the National Park Service’s urban national park experiment was evident at the GGNP’s inception. Congress understood that the creation of the GGNP “[would] not add significantly to the open lands in the city,” but equally understood that by bringing the National Park System’s values to this urban environment we would ensure that the GGNP was preserved “as far as possible, in its natural setting, and protect[ed] from development and uses which would destroy the scenic beauty and natural character of the area.”

National Parks such as the GGNP cannot accomplish this goal while simultaneously accommodating all forms of recreation enjoyed by the public without restriction. In establishing the GGNP Congress recognized this by stating that recreational and educational uses “shall” only occur in the Park if they are “consistent with sound principles of land use planning and management.”

A national park, as opposed to a city, county, regional, or even a state park, was uniquely able to make this vision become reality because of the National Park System’s greater resources, its relative insulation from political whims, and its less-parochial outlook. The unique role the GGNP plays in the Bay Area’s diverse open spaces has also been highlighted in the National Park Service’s planning documents, which explain that the role of the GGNP is to “provide opportunities for forms of enjoyment that are uniquely suited and appropriate for the superlative natural and cultural resources found in the parks” and that the park service will “defer to local, state, and other . . . organizations to meet the broader spectrum of recreational needs and demands.”

This urban national park experiment has largely worked. The GGNP has become synonymous with the high quality of life San Franciscan’s hold dear, intertwined with our identity as much as the Golden Gate Bridge and the 49ers. It props-up property values, provides recreational opportunities for thousands of visitors, and creates an oasis for a variety of wildlife species.

The Golden Gate National Parks Endangered Species Big Year aims to encourage exploration and understanding of the unique role that the GGNP plays in our collection of public lands, while encouraging people to take steps to preserve the unique and imperiled wildlife that call the GGNP home.

Search for Twain’s Frog and the Beautiful Serpent Lecture at Mt. Diablo Audubon Society: What Nitrogen Deposition Can Teach Us...