The Contra Costa Wallflower, Erysimum capitatum var. angustatum, is a biennial or perennial sub-shrub in the Brassicaceae (mustard) family. It grows fairly erect and can reach 18 inches in height, with fragrant and highly structured wildflower with yellow petals. It has been protected as endangered under the Federal Endangered Species Act since 1978, and critical habitat has been since 1978 as well. 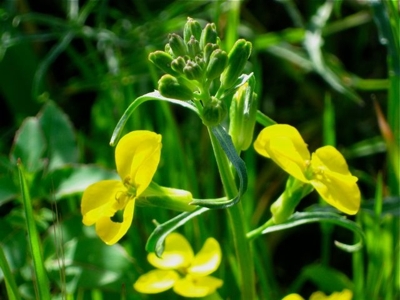 The Contra Costa wallflower was originally described in 1896 based on specimens collected “on the banks of the San Joaquin River in the interior of California.” It is endemic to the riverine dune habitat found within and immediately adjacent to the Antioch Dunes National Wildlife Refuge. The plant generally begins flowering in March, peaking in April or May. Pollination of the Contra Costa wallflower is conducted by a variety of unspecialized insects.

Like the Lange’s Metalmark Butterfly, the Contra Costa Wallflower is endemic to the Antioch Dunes National Wildlife Refuge. Although the population of the plant fluctuates greatly, the long-term trend indicates the species is in jeopardy. In 1978 only 174 fruiting plants were identified. In 1982 the estimate of plants had increased to 700 plants. The highest population count recorded to date was in 1999 but a steady decline in population size has occurred since then. Non-native, invasive weeds are threatening to crowd-out the species in the Antioch Dunes, and this is spurred by nitrogen deposition in the dunes.