On April 15, 2003, the Service issued the Migratory Bird Permit Memorandum, which introduced a new policy position on the destruction of migratory bird nests. In this memorandum, the Service argues that when an “inactive” bird nest—one without birds or eggs—is destroyed, there is no violation of law and no permit to destroy the nest is required so long as the nest is destroyed without “possession”. The Memo justified this assessment by suggesting that only “possession” of nests is prohibited under the MBTA, and that “destruction” does not entail “possession.” But the Memo’s arguments break down under scrutiny, and its conclusions are ultimately unsupported by logic or law.

The Service’s nest policy incorrectly interprets the statutory language of the MTBA by unlawfully distinguishing “nest” from “bird”; fails to recognize that destruction of a nest necessarily includes possessing it; and bases the distinction between active and inactive nests on faulty logic in light of common bird behaviors. In addition, the Service’s nest policy is inconsistent with the broader policy advocated in the MTBA itself: the protection of migratory birds with the resources the Service has at its disposal.

The Migratory Bird Permit Memorandum can be found on the Service’s website here.

The distinction made in the Service’s nest policy between active and inactive nests is inconsistent with scientific research on migratory birds. Basic biological characteristics are shared by many species of birds. Under the policy established by the Policy Memo, only a nest that is “occupied by eggs or nestlings, or is otherwise still essential to the survival of a juvenile bird,” is protected. However, for many bird species, a nest does not only shelter one brood of young and eggs for one breeding season. And even apparently unoccupied nests can serve vital functions beyond breeding, which can be disrupted by nest destruction.

For example, some birds, including the Great Horned Owl, do not build their own nests. Instead, they depend upon the use of old nests built by other birds. 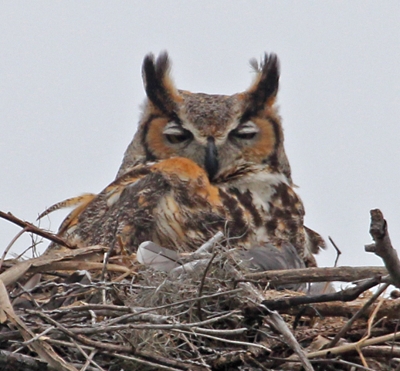 Other birds build multiple nests in a single season even though they only need one. For example, Sedge Wrens may build up to 20 nests in a season. The extra nests are not used for breeding, but given the extra time and effort it takes to build them, it is likely that they serve a purpose beyond just being an extra, unused nest. Researchers have found that breeding nests were more successful when they were near larger clusters of dummy nests.

Researchers also believe that these extra nests could serve as decoys to distract and deter predators, decreasing the likelihood that predators such as rats or chipmunks may discover the actual nest to which a mating pair has entrusted its young, before leaving the area. Additionally, a nest could be used as a second or third nest later in the season.

Moreover, a nest that is unoccupied by eggs, nestlings or juveniles may still be used, i.e., “occupied,” by birds. For example, nests can be used as shelter by adults outside the breeding season. Additionally, some waterbirds spend all day at sea feeding, after which they need a safe place to roost at night.

Even though the Service is well aware of the need for flexibility in addressing the differing nest usage among birds, the sweeping Policy Memo issued in 2003 is still in use, allowing bird nests to be destroyed even if adult birds still occupied them—so long as the bird is not in the nest at the time of destruction. If there are no eggs, there is no need for a permit to destroy a nest, without exception