On January 17, 2017, Wild Equity and a coalition of other environmental groups filed an appeal of the City’s plan to redevelop Sharp Park Golf Course.

The FEIR removes SNRAMP’s original plan for Sharp Park’s natural areas and replaces it with a project to redevelop Sharp Park Golf Course within the “recovery” area for two imperiled species, the San Francisco Garter Snake and the California Red-Legged Frog.

Sharp Park Golf Course is arguably San Francisco’s greatest economic and ecological mistake. It loses hundreds of thousands of dollars every year, taking money away from San Francisco’s neighborhood parks and community centers. It kills two endangered species as it operates, and its location along California’s coast means that before long it will be flooded by sea level rise: already several links have been washed out to sea.

In February 2006 the Recreation and Parks Department and the Planning Department began a California Environmental Quality Act (“CEQA”) process for the Significant Natural Resource Areas Management Plan (“SNRAMP”). The SNRAMP proposed projects in the City’s Natural Areas, including Sharp Park’s Natural Areas, but did not propose any changes to Sharp Park Golf Course. 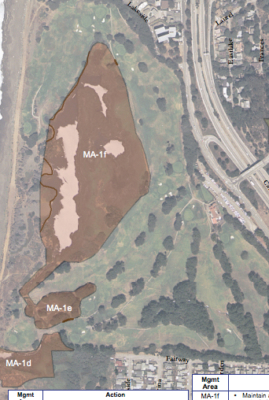 The original plan’s management boundary (depicted by areas shaded in brown) was limited to the natural lagoon at Sharp Park. No modifications to the golf course were proposed. Environmental groups unanimously supported this plan.

Separately in 2009 the Recreation and Parks Department conceded to the demands of golf purists by releasing a controversial proposal to redevelop Sharp Park Golf Course. Known as “A18,” the proposal was heavily criticized by environmentalists, budget hawks, and Bay Area scientists, who stated

“It is our conclusion that the minimal habitat enhancement proposed by the Park Department in their preferred 18-hole alternative is inadequate to allow the recovery of the San Francisco garter snake and red-legged frog at the site, and is set up to fail with climate change and sea-level rise.” [source]

When this criticism became public A18 appeared dead on arrival at City Hall. Indeed, shortly after A18 was criticized, the Recreation and Parks Department publicly stated:

“Because redesigning or eliminating the Sharp Park Golf Course is a separate proposal being studied by SFRPD, it will not be included or evaluated as part of the proposed [Significant Natural Areas Management Plan] project analyzed in the EIR. Should changes to the Sharp Park Golf Course be proposed, they would undergo a separate regulatory review, including CEQA environmental review.” [source]

Yet in November 2016 the Department released a SNRAMP FEIR that removed the original plan for Sharp Park and replaced it with A18, the Golf Course redevelopment project. Moreover, the FEIR declares the Golf Course an Historic Resource that CEQA must protect—even though the original design was washed away by ocean storms decades ago—and therefore refused to consider alternatives that would protect Sharp Park’s environment from this controversial project.

Despite assurances that A18 (L) would never be inserted into the SNRAMP environmental review, the final EIR plan for Sharp Park (R) is indistinguishable from it.

Sharp Park, arguably San Francisco’s most ecologically and biologically important natural area, would be devastated by implementation of A18, and in the seven years since A18 was first announced, many of the SNRAMP proposals for San Francisco’s 31 other natural areas have moved forward or implemented, because they either didn’t require environmental review or because they were incorporated into other park projects.

Nonetheless, to ensure that SNRAMP’s good proposals for the City’s other natural areas wouldn’t be affected by the disastrous proposal for Sharp Park, Wild Equity and an array of environmental and community supporters demanded that the Sharp Park Golf Course redevelopment plan be segregated out of SNRAMP and its environmental review process, so the golf course project could stand or more likely, fall on its own merits.

But these reasonable proposals have fallen on deaf ears. The Recreation and Parks Department has informed San Francisco’s environmental community that we must sacrifice our most precious biological resource if we desire modest conservation gains in San Francisco’s other natural landscapes.

Now Wild Equity, the Sierra Club, Surfrider Foundation, S.F. League of Conservation Voters, National Parks Conservation Association, Sequoia Audubon and others all agree: the environmental benefits proposed by SNRAMP in other areas are far outweighed by the environmental destruction the golf course bailout would cause at Sharp Park.

Last Chance for the Beautiful Serpent?

Build It and They Will Come: Emperor Goose at Sharp Park!!

Build It and They Will Come: Emperor Goose at Sharp Park!!