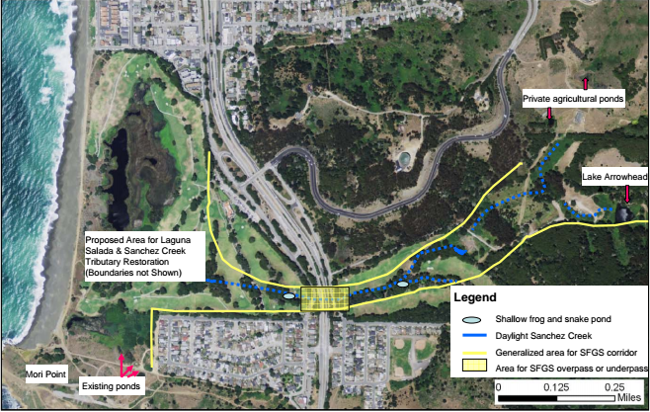 Given the massive impact human civilization has on Earth, an equitable relationship between people and the other species of the planet can seem like a challenge. But like the community plan for a new public park at Sharp Park, projects around California are trying to address this by creating habitat corridors so wildlife can cross busy highways safely.

For example, Caltrans, the state agency in charge of road and highway maintenance, planning, and infrastructure, has proposed building a wildlife bridge over Highway 101 in Aurora Hills, a Los Angeles suburb. This wildlife bridge would provide passage for bobcats, mountain lions, and other wildlife, in an effort to reduce instances of roadkill on the 101. At 200 feet in length, and 165 feet wide, this wildlife bridge would become the largest in the United States, if built. Other wildlife bridges (some quite impressive) already exist around the world- including a few in national parks in Montana, Canada, and Australia.

Projects that enhance coexistence in areas that are dominated by human presence, are not only feasible, they are inspirational- and San Francisco has an opportunity to be part of this effort. Sharp Park is home to two federally protected species under the Endangered Species Act- the California Red-Legged Frog and the San Francisco Garter Snake, but the City has been operating a golf course on the land that kills both species. In fact, Wild Equity has had to file multiple lawsuits against SFRPD for their failure to comply with measures put in place to protect the two species, resulting in large legal fees to the city and mandates to do more to protect endangered wildlife.

Rather than endless litigation and increased budget deficits from subsidizing this golf course, a coalition of environmental, recreation, and community organizations have proposed restoring Sharp Park. This would not only save taxpayers money, but also generate economic benefits to Pacifica’s local economy, and provide new recreation opportunities that meet the demands of modern Bay Area residents. It would also provide the California Red-Legged Frog and the San Francisco Garter Snake with a safe passage across Highway 1 that would be adjacent to, and inclusive of, Sanchez Creek. This would connect wildlife populations between Sharp Park, Lake Arrowhead, and areas beyond the park, enhancing their chance of survival. This is essential for the long-term recovery for the species.

While our restoration plan aims to provide safer habitats for wildlife, San Francisco wants to invest millions to redevelop parts of Sharp Park Golf Course: an enormous ecological and economic mistake. If CalTrans has the foresight to provide safe passage for wildlife, it’s time we demand it from the City of St. Francis too.

Don’t let San Francisco keep pouring taxpayer dollars into this unprofitable and ecologically hostile golf course. Click here to find out how you can take action and help our campaign to restore Sharp Park.