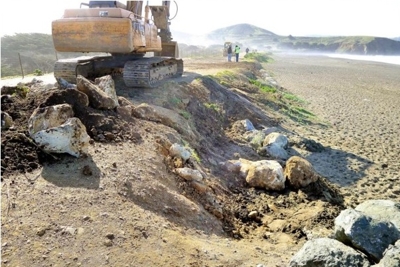 The California Coastal Commission is and has been allowing San Francisco Recreation and Parks Department to lawlessly develop and maintain a seawall on the beach at Sharp Park Golf Course. Our allies at Surfrider Foundation, San Francisco and San Mateo County chapters, have written a letter to California Coastal Commission to bring attention to this issue.

“SFRPD is violating and has been violating the Coastal Act for several years, by constructing and maintaining a rock revetment on the property (which is ‘development’ under the Coastal Act), without a required [Coastal Development Permit]”, the letter reads.

On multiple occasions since 2013, Surfrider Foundation provided the CCC with notice of SFRPD’s violation. Following an investigation in 2013, the Commission concluded that SFRPD was indeed in violation of the Coastal Act. Subsequently, the Commission gave the Parks Department a deadline of March 11, 2013 “by which it was required to remedy the violation” i.e. either submit an application for an after-the-fact Coastal Development Permit, or entirely remove any development that had been placed on the beach.. When SFRPD failed to meet the deadline to apply for the permit, the CCC granted an extension to the deadline…and as SFRPD has continued to miss the deadline, and CCC has continued to grant extensions.

Fast forward two-and-a-half years, and SFRPD still has no permit to legally do any sort of construction on the beach, and nothing has been done about it- the CCC has repeatedly turned a blind eye to the Parks Department’s continued illegal activities on the beach. As of today, there is no indication that the CCC intends to crack down on SFRPD’s negligence, mismanagement of public resources, and destruction of our beach.

SFRPD has been illegally operating at the unsustainable, money-losing Sharp Park Golf Course for years, continuously killing the federally protected California Red Legged Frog and San Francisco Garter Snake along the way. It’s time that San Francisco shut this golf course down once and for all and hand over the lands to National Park Service for restoration and repurposement into a public park for all to enjoy.

You can read the entire letter from Surfrider Foundation here: 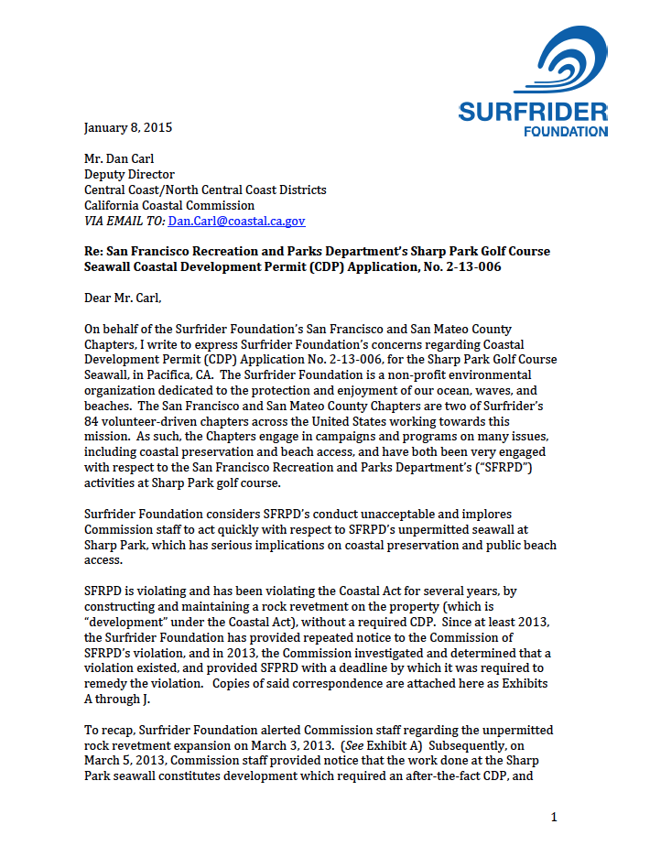