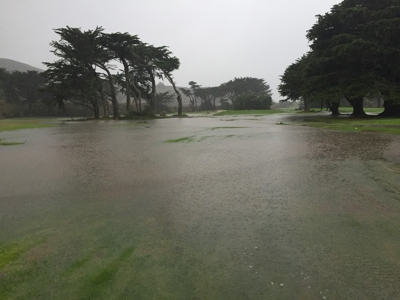 Sharp Park Golf Course has flooding issues as it is. Sea level rise will only make it worse.

New reports say that sea levels are now rising faster than they have at any point in the common era, and the clock is ticking on the opportunity to restore Sharp Park, which would protect the lands from flooding brought on by sea level rise.

According to Justin Gillis of the New York Times, a new report posted by the Proceedings of the National Academy of Sciences says that sea levels are now rising at the fastest rate in 28 centuries. Towns such as Annapolis, Maryland have experienced 394 days of flooding between 2005 and 2014, a stark contrast from the 32 days of flooding in the same area between 1955 and 1964. In just a matter of 50 years, the impacts of sea level rise have become increasingly observable and problematic, and will only get worse from here on out.

The science seems to fall on deaf ears, however, as Pacifica, San Mateo County, and San Francisco continue to authorize shortsighted seaside development projects. The last thing we should be doing is punting adaptation 30 years down the line, yet San Francisco continues to fight against the restoration of Sharp Park and has approved a number of large scale waterfront projects, such as the contentious new billion dollar stadium for the Golden State Warriors in the Mission Bay neighborhood.

Meanwhile, Pacifica has rubber-stamped the construction of both a new mobile home park and a library on the fragile coastline. Regular storm cycles such as El Nino have already caused significant damage to coastal infrastructure, and over time sea level rise will only substantially exacerbate the problem. In Pacifica, cliffs and sea walls have crumbled, people have been forced to vacate their homes, and cliffside apartment buildings have been demolished as a safety precaution- all on the taxpayers dime. $450 thousand dollars have been needed for emergency repairs to the sea wall alone. The town’s Sharp Park Golf Course has been subject to closures due to annual flooding caused by rain, and yet both San Francisco and San Mateo County are intent on keeping the golf course open and even partially redeveloped, despite environmental and economic conditions working against the course’s favor. As sea levels rise, the ocean will engulf Sharp Park Golf Course unless we let the seawall erode and the lands revert to a wetland, which would act as a natural buffer against elevating waters.

If Sharp Park Golf Course is closed and repurposed as a new national park, the restoration of the wetlands would decelerate the impact of sea level rise, since wetlands “break up” wave energy. Plus, having Sharp Park as a publicly accessible park operated by Golden Gate National Recreation Area (like the adjacent Mori Point) would allow the federally protected California Red-Legged Frog and San Francisco Garter Snake a chance to thrive, while also providing locals with more diverse recreational opportunities, saving taxpayers millions, and giving Pacifica an opportunity to make tourism-based revenue on land that is otherwise losing money. Moreover, the National Park Service, SF Board of Supervisors, residents of San Francisco and Pacifica, and even golfers have all supported the initiative to restore Sharp Park.

Bewilderingly, Mayor Ed Lee and the San Mateo County Board of Supervisors want to keep the golf course open, despite the viable and fiscally responsible alternatives available, and thus continuing an era of questionable long-term decision making.

Tell your city and county administrators to start taking sea level rise seriously, and click here to tell Ed Lee and the San Francisco Board of Supervisors to close down and restore Sharp Park today.