Erica Ely, a student at San Francisco State University, was crowned the 2012 Golden Gate National Parks Endangered Species Big Year champion for seeing and saving the most endangered species during the course of the competition. She is the youngest person to ever win the overall competition. 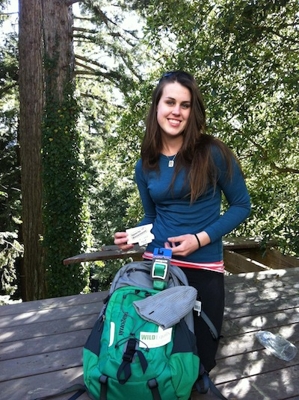 Erica won the competition by seeing the largest number of the Golden Gate National Park’s endangered species, and then taking the most actions that help those species recover. As the 2012 champion she earned a $100 gift certificate to the Sports Basement and a backpack and clothing from Patagonia’s San Francisco store.

Congratulation Erica, and thank you for helping us save our imperiled neighbors!

Keep an eye out for your chance to win prizes for seeing and saving endangered species in 2014, when we run our next public Golden Gate National Parks Endangered Species Big Year.

Sunday, Dec. 2, 11:00 am: Salmon Stroll at Muir Woods!
Save Some, Win Something: Tiburon Paintbrush Competition Is On!
Find Four Frogs in this Photo
Sunday, Nov. 11, 11 am: Snowy Plover Walk-About
June 2: Hump Day Habitat Restoration
Comment on Unleashed Dogs in the GGNRA
0 replies