Friday, September 14, 2012, 6:00 p.m. – 8:00 p.m. — Join Wild Equity to see JUMP: A Frogumentary by Justin Bookey. Every year in Calaveras County thousands of people compete in a frog jumping competition, an unusual Twain-inspired tradition since 1928. The film follows three teams working non-stop to compete for a chance at the Hop of Fame. The frogumentary will be shown at Sports Basement on Bryant St., 5th floor. Snacks and wine will be served!

Seating is limited so please RSVP on this page!

Then join us that following Sunday, September 16, 2012, 10:00 a.m.- 12:00 p.m. at Mori Point to search for the “Jumping Frog of Calaveras County” known as the California Red-Legged Frog and the most beautiful serpent in all of North America, the San Francisco Garter Snake. 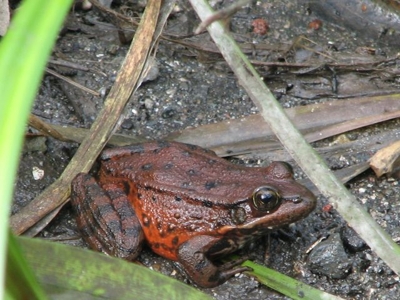