Rediscovered historic photos of Sharp Park, along with field notes stored at UC Berkeley’s Museum of Vertebrate Zoology, indicate that Sharp Park was once excellent habitat for the San Francisco garter snake and the California red-legged frog: and that Sharp Park Golf Course is the primary threat to both species at the site.

This undated photo of Sharp Park shows Laguna Salada before the golf course was built, with Mori Point Ridge in the background. 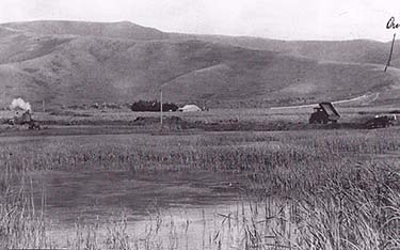 In this photo, the lagoon is clearly fringed with cattails, vegetation that can’t grow in saline environments. This indicates that Laguna Salada was not a “salt lake” as golf privatization advocates have argued, but a fresh lagoon where the San Francisco garter snake and the California red-legged frog could thrive.

At least until Sharp Park Golf Course was built. The earliest systematic biological surveys of San Mateo County were conducted by Dr. Wade Fox—the man who would eventually scientifically describe the San Francisco garter snake—when he was a graduate student at UC Berkeley. Although he died in his prime, Dr. Fox’s field notes have been preserved at the UC Berkeley Museum of Vertebrate Zoology. These notes have finally been digitized, and they show that in 1946 Dr. Fox found a dead San Francisco garter snake at Sharp Park, which he concluded was “probably killed by golfers—they probably die frequently in this manner.” Presaging the species precipitous decline, Dr. Fox also noted that the only secure area remaining for the species at Sharp Park was in the wet grasses near the lagoon: the surrounding golf links were deadly to the species. 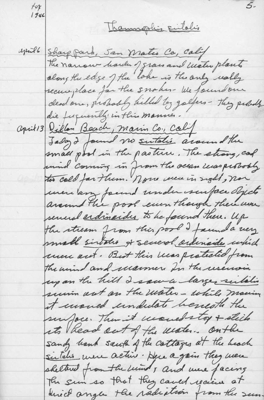