ANTIOCH, Calif.— A coalition of conservation and environmental justice groups submitted a legal notice today of their intent to sue the Environmental Protection Agency for approving PG&E’s Gateway Generating Station, which harms endangered species and local communities. The Gateway Generating Station is a large, natural-gas-fired power plant in Antioch, Calif., that pollutes nearby communities, worsens the global climate crisis, and threatens the survival of one of North America’s most imperiled species: the Lange’s Metalmark Butterfly. 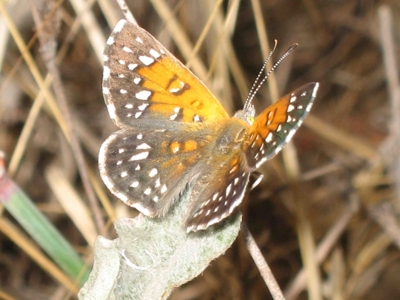 Today’s notice from the Wild Equity Institute, the Center for Biological Diversity and Communities for a Better Environment comes on the heels of a $2 million settlement with a neighboring power plant, the Oakley Generating Station, and marks the third time PG&E and the EPA have been notified of their illegal activities.

“Four other power plants in the Bay Area have adopted model agreements to protect endangered butterflies from nitrogen pollution and also protect local communities,” said Laura Horton, staff attorney at the Wild Equity Institute. “PG&E has already been put on notice twice of their violations. This is PG&E’s last chance to do the right thing or its three strikes and they’re out.”

Nitrogen emissions from the Gateway Generating Station pollute the neighboring Antioch Dunes National Wildlife Refuge and transform the chemical composition of those historic sand dunes. Under these polluted conditions, the butterfly’s host plant is lost to invasive weeds, resulting in a population decline for the butterfly. Gateway’s emissions also harm local communities by contributing more ozone pollution and soot to an area already disproportionately overwhelmed by power plant pollution.

“These communities are harmed by a large number of power plants, each of which emits greenhouse gases and pollutants that are toxic both to the people who live, work and go to school near the plants, and the surrounding environment,” said Roger Lin, an attorney at Communities for a Better Environment.

There are only a few dozen Lange’s metalmark butterflies remaining in the world. The U.S. Fish and Wildlife Service has determined that nitrogen pollution from power plants near the Antioch Dunes National Wildlife Refuge is “virtually certain” to cause the species to go extinct, and earlier this year joined with conservation groups to demand the EPA and PG&E consult with experts and mitigate their environmental harms.

Background on the Lange’s Metalmark Butterfly and Gateway’s Impacts.

The Lange’s Metalmark Butterfly is a brightly colored, fragile and highly endangered butterfly that has been protected by the federal Endangered Species Act since 1976. The species is endemic to the Antioch Dunes in Contra Costa County, a relict desert landscape left behind as California’s prehistoric deserts retreated from the Bay Area 140,000 years ago. Because of the Antioch Dunes’ isolation, many species found in the dunes are unique and very rare.

Sand dunes like the Antioch Dunes are nitrogen deficient, and increased amounts of airborne nitrogen changes the chemical composition of the dunes, creating soil conditions that are only suitable for the growth of invasive weeds. The Antioch Dunes’ soils are critically impacted by nitrogen deposition, and Gateway will deposit even more nitrogen into Antioch Dunes, pushing the Lange’s Metalmark toward extinction. To date, PG&E has not mitigated Gateway’s endangered species impacts, even though four other similarly situated power plants have contributed millions of dollars to mitigate their impacts on endangered butterflies.