The Endangered Species Act is arguably the most powerful conservation law ever enacted by any nation. It is also one of the most beautiful: not because of its eloquent prose, but because it is a shining example of our Nation’s democratic principles, our humility, and our compassion for those that are least like us.

Enacted by Congress in 1973 and signed into law by President Richard Nixon—a Republican who is perhaps our country’s greatest environmental president—the Endangered Species Act was the country’s response to a disturbing body of scientific evidence calculating the rate of species extinctions around the globe. 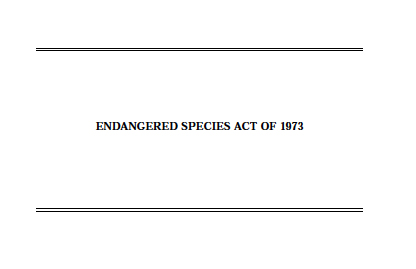 Click the image above to read the full Endangered Species Act

However, as Congress recognized in passing the Endangered Species Act, the rate of extinction had become wholly unnatural. Between ten and one-hundred species are estimated to go extinct every day: the natural “background” rate of extinction, in contrast, is approximately one species per century. Scientists now estimate that approximately 20% of all birds, 25% of all primates, and 33% of all amphibians are in danger of extinction.

The cause of this high rate of extinction is a single species: Homo sapiens. The exponential growth of our population and economy has too often come at the expense of our environment, and today habitat destruction, the purposeful and accidental spread of invasive species, the overuse of resources, pollution, and global climate change have made us the primary agent of a mass extinction event.

We are not the only species capable of causing extinction on the planet. But we have the capacity to understand concepts like death and extinction that other forms of life do not. Our capacity for humility and selflessness, the very things that make us human, are what create our responsibility to preserve those things that are least like us. The Endangered Species Act is our nation’s attempt to capture these ideals and make them law.

The Endangered Species Act is America’s safety net for plants and animals on the brink of extinction. Today it protects over 1,200 species and the habitats upon which they depend within the United States and its territories.

The Endangered Species Act works. The Bald Eagle, the Gray Whale, and the Peregrine Falcon are some of the Act’s most well known conservation successes, but literally hundreds of other species have benefited as well. The California Brown Pelican, theSouthern Sea Otter, the Least Bell’s Vireo, and many other species have seen their populations increase thanks to the Endangered Species Act.

The Endangered Species Act works because it requires decisions about a species’ status to be based on the best available science, not politics or popularity. It works because it makes the preservation of endangered species a higher priority than the primary missions of government bureaucracies. And the Endangered Species Act works because Congress explained, and the Supreme Court has found, that the web of life that sustains us is of incalculable value, and therefore we must preserve it whatever the cost to developers and corporations.

The ESA helped save the Brown Pelican, which was declared recovered and delisted in 2009.

But most importantly, the Endangered Species Act works because at its core it is a democratic statute. The Act empowers the citizenry to initiate conservation actions for imperiled species, and does not rely on government bureaucracies alone to be nimble enough to save endangered species in every instance. As the race against extinction is ultimately a race against time, Congress’ decision to allow any person to present scientific data to the government and get timely responses regarding the protection of endangered species is perhaps the most important aspect of the Endangered Species Act.

The Endangered Species Act and the Bay Area

The Bay Area is renowned for its open space and connection with nature. However, this was not always the case: rampant development in San Francisco destroyed between 95-97% of its indigenous habitats. One of the casualties of this development was a species called the Xerces Blue Butterfly.

The Xerces Blue Butterfly was indigenous to the coastal sand dunes of what is now the Sunset District of San Francisco. As the Sunset District was developed, the habitat upon which the Xerces Blue depended was destroyed, and the butterfly could no longer survive. The last Xerces Blue Butterfly was seen in the early 1940s. It is the first American butterfly to become extinct as a result of habitat destruction caused by development.