An extraordinary victory for people and the environment was won this week when the San Francisco Board of Supervisors voted to begin restoration planning with the National Park Service for Sharp Park, a City-owned wetland in Pacifica.

A restoration vision for Sharp Park.

For many years the City has been operationg a money-losing, endangered species-killing golf course on the property. The new ordinance requires the City to pursue a new vision for the land—a national park vision that provides recreation everyone can enjoy while saving San Francisco money.

How the Campaign Was Won: Subcommittee Turnout

The victory was won this week, but involved years of grassroots campaigning. It culminated on December 5 when we delivered a massive turnout to a subcommittee hearing on the ordinance. Our supporters filled the hearing, spilled into the hallway, and filled the overflow rooms with turquoise T-shirts—the emblematic color of the San Francisco Garter Snake.

The turnout was not only large, but diverse. Our campaign was built on grassroots partnerships between environmental, park, justice, and social service organizations, and it was reflected in the turnout that we were able to generate. 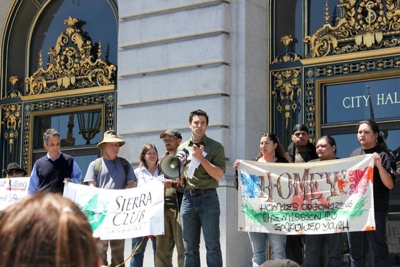 Our coalition showed its strength last April for Save the Frogs Day
Endangered Species/Endangered Communities Rally.

The turnout clearly influenced the subcommittee, which moved the ordinance on to the full board. But perhaps more importantly, it also inspired our supporters. Mike Lynes of Golden Gate Audubon stated “I was impressed by the turn out that you guys managed to produce. I haven’t seen turn out like that for the environmental community on any issue in the past 3 years.” Arthur Feinstein of the Sierra Club explained that the turnout was “one of the largest the environmental community has ever generated in San Francisco. The diversity of speakers, both in age and ethnicity, was also extremely encouraging and impressive.” A long-time Pacifica resident stated “the subcommittee hearing was truly inspiring . . . extremely welcome and needed, and an accomplishment in itself.”

Who Opposes Restoring Sharp Park? Chamber of Commerce, Wealthy Law Partners, and the One Percent

The diverse groups supporting our campaign stood in stark contrast to the opponents of a new National Park at Sharp Park: elite golfers and development interests from coastal San Mateo County. “Golf purist” Sandy Tatum was there, demanding that Sharp Park Golf Course’s drain on neighborhood parks and city services continue. This wasn’t much of a surprise: the wealthy, Palo Alto-based retired lawyer once convinced San Francisco to take more than $16 million from a state program to build playgrounds for poor children and invest the money in Harding Park Golf Course, San Francisco’s most expensive and exclusive course. To date, the money has not been paid back in full, and San Francisco’s playgrounds and ballfields remain underfunded.

Yet on the same day, 100 Economists released a report explaining something the New York Times first reported in 2006: that national parks are far better drivers of the local economy than golf courses.

The Full Board Vote

This is why we knew that our common-sense, data-driven campaign would be appealing to this Board. Study after study has shown that Sharp Park Golf Course is draining hundreds of thousands of dollars from the City’s coffers annually, while killing two endangered species in the process. Fixing these environmental and financial problems while retaining 18-holes of golf on the land will require massive capital investments—on land that scientists have explained will be lost to climate change-induced sea level rise. A far better plan is to work with Sharp Park’s natural features and create a park everyone can enjoy. The Board of Supervisors took the Ordinance up in the late afternoon. Supervisor John Avalos first offered some small amendments to the ordinance—all of which were approved. Supervisor Sean Elsbernd, who has been carrying water for San Mateo County on this issue for years, argued that the ordinance violated the California Environmental Quality Act, but the City’s Environmental Review Officer did not support his claim.

In perhaps the most disingenuous argument, Supervisor Scott Weiner claimed he would not vote for the ordinance because of a policy disagreement with the National Park Service over pet management. But the Supervisor is smart enough to know that walking dogs at Sharp Park is currently illegal, on-leash or off. When a National Park is created on the land, dogs will have much better legal access than they do now. He was clearly trying to avoid debating the measure on the merits, while appealing to Supervisor David Campos—an avowed dog lover—in hopes of peeling away critical votes.

But in the end, Supervisor Eric Mar made a well-reasoned statement about why he supports the ordinance, and referenced the ability of the ordinance to improve golf conditions at City courses; Supervisor David Chiu said he shared our vision and made a small amendment to allow the City to continue to negotiate—but not sign—alternative agreements with other agencies; and Supervisor Jane Kim also expressed her support for our plan. Combined with the votes of Supervisors Ross Mirkarimi, David Campos, and our champion John Avalos, the ordinance passed the full board!

None of this could have occurred without all our partners helping advance the cause. Michelle Myers of the Sierra Club was particularly crucial in the last few weeks, and the extraordinary commitment of Neal Desai of the National Parks Conservation Association was essential to the success of the campaign. Jeff Miller of the Center for Biological Diversity aided with media work, and dozens of volunteers, led by Barbara Beth of the Wild Equity Institute, came through at critical moments. And of course, crucial financial support was also essential, and foundations like the Rose Foundation for Communities and the Environment, and the Fund for Wild Nature played a large role in our success.

Of course, “it ain’t over ‘till it’s over,” and there are always things that need to be tended. On December 13, the Board will have its required second reading of the ordinance. We do not anticipate any changes at this hearing. From there, the ordinance will be moved to the Mayor for his signature. If he doesn’t act within 10 days, the ordinance becomes law.

Will the Mayor bow to pressure from development interests and wealthy golf extremists who think this game is more valuable than playgrounds for kids, and services for children and seniors? The mayor has yet to meet with us, and we do know he loves his golf. Stay tuned for more information about the Mayor—and make sure you contact him to express your support for restoring Sharp Park!

The Lessingia Blooms in Lobos Creek Dunes WALC in the Wild!
Scroll to top