The Wild Equity Institute has filed a formal legal petition and submitted supporting comments to add the San Francisco gartersnake to the list of species protected by the Convention on International Trade in Endangered Species of Wild Fauna and Flora (“CITES”). The request could be implemented as soon as March 3, 2013, when the CITES Conference of the Parties will be convened in Bangkok, Thailand. 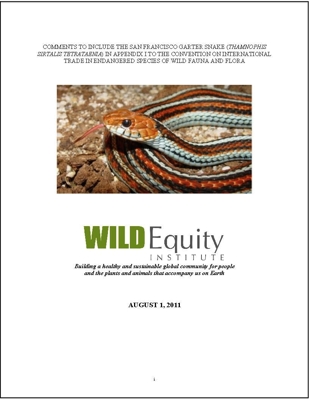 Formal legal petition to add the San Francsico gartersnake to the list of species protected by CITES.

Although the Endangered Species Act has protected the San Francisco gartersnake since 1973, it has never been protected under treaties that prohibit international trade in endangered species and/or their parts. This has been the case even though poaching has been documented to adversely impact the San Francisco gartersnake, often referred to as “the most beautiful serpent in North America.”

Strangely enough, Northern Europe—not Northern California—is the global hotspot for San Francisco gartersnake fanciers and breeders. The snakes used in Northern Europe were originally taken from the wild, either before the Endangered Species Act was passed or illegally after the snake was protected. In either case, unregulated breeding—often solely to enhance the color and pattern of the species’ beautiful stripes—has in most instances made these specimens unsuitable for reintroduction to the wild.

Unregulated breeding and trade is not only impacting the stock of captive animals, it is also encouraging poaching. The Wild Equity Institute has obtained information about possible poaching events in 2005 and 2006, and an ongoing desire for breeders to obtain “fresh stock” from the wild to address inbreeding and other problems associated with the captive San Francisco gartersnake populations in Northern Europe.

With Sharp Park Golf Course killing individual animals in the wild, poaching of wild animals cannot be countenanced. But because the Endangered Species Act only regulates trade to and from the United States, only CITES can regulate the trade happening across Northern Europe and other non-U.S. locations.