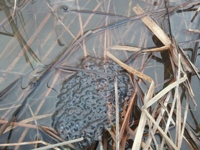 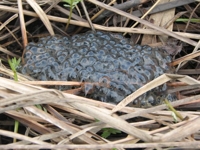 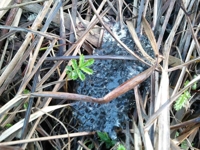 This California red-legged frog egg mass was stranded and left to die after Sharp Park Golf Course’s pumping operations drained the frog’s habitat. Wild Equity Institute sent a letter to authorities requesting that they take emergency steps to save the egg mass when it was first exposed to the air, but no action was taken.

Sharp Park is a wetland that San Francisco regularly drains so golf can be played on the land. But draining the land reduces the depth of the water in breeding and feeding areas for the California red-legged frog and the San Francisco garter snake. San Francisco has known about the problem since at least 1992, when the first biological surveys found dead California red-legged frog egg masses on the property. Yet the City still does not have any Endangered Species Act permits to kill endangered wildlife.

In recent years, the City’s management has resulted in several violations of the Endangered Species Act:

“Restoring the natural ecosystem at Sharp Park is not only the lowest-cost alternative, it will serve the recreation needs of the greatest number of people including hikers and birders while saving endangered endemic species. It’s a win-win-win,” said Nancy Arbuckle, conservation chair of the Sequoia Audubon Society.

“We feel strongly that an interconnected and protective coastal ecosystem (beach, dune and barrier lagoon) must be recognized as a dynamic, integrated unit; you can’t save just one part and expect it to work correctly,” said Michael Stewart, vice chair of the San Francisco chapter of the Surfrider Foundation. “This would provide the most benefit to local endangered species, an expansion of desired recreational opportunities, and the best (and least expensive) flood protection for the community at Sharp Park – two, four or even zero legged.”

A peer-reviewed scientific study by coastal restoration experts, released in February, concluded that restoration of the natural lagoon and beach processes at Laguna Salada wetlands in Sharp Park will provide the most public benefit and best protect endangered species, at much less expense than the Park Department plan for maintaining the status quo. The report makes several key findings:

The new restoration alternative would allow beneficial natural processes to reconfigure the Laguna Salada wetlands and beach to a natural dynamic, providing the most benefit to endangered species, protecting the beach from erosion, ensuring resilience and adaptivity for habitat to respond to sea-level rise, and improving flood protection for adjacent residential areas, all with lower long-term costs and maintenance requirements. The authors and peer reviewers of the report have unparalleled expertise in Bay Area coastal and aquatic ecology and wildlife, hydrology, coastal engineering and ecosystem restoration.

The new restoration plan is estimated to cost about $5 million over a 50-year time frame. In contrast, the Park Department preferred plan would drain taxpayers of between $12 million and $18 million in short-term costs (including seawall construction) along with hundreds of thousands of dollars per year for infrastructure operations and maintenance, and continuing liability for fines for Endangered Species Act violations.

In response the Park Department abandoned plans to reinforce a beach-eroding seawall that protects the golf course; it also conceded that current golf operations are not compatible with protection of endangered species.