The people have spoken: and they have selected the Wild Equity Institute to receive Patagonia San Francisco’s $2,500 grand prize!

The store’s third annual “Voice Your Choice” campaign invited Patagonia’s shoppers to cast votes and determine how the store should distribute $5,000 in grant money to three local environmental organizations. The Wild Equity Institute was awarded $2,500, and the second- and third-place organizations received $1,500 and $1,000 respectively.

“We are grateful to Patagonia San Francisco for selecting us for the program, and honored that so many of its customers support our work,” said Brent Plater, Executive Director of the Wild Equity Institute. “Patagonia has a rich tradition of supporting cutting-edge environmental organizations, and we’ll continue that tradition by uniting the grassroots conservation and environmental justice movements in shared campaigns that create a more equitable world for all.” 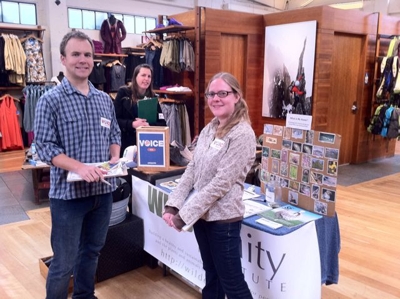 In addition to the Wild Equity Institute, San Francisco Surfrider and TransForm competed in the Voice Your Choice program. Votes were accepted at the store in San Francisco from March 10 through March 24. Participants could cast one vote per store per visit. No purchase was necessary. At the close of voting, the Wild Equity Institute was announced as the grand prize winner, with San Francisco Surfrider and TransForm announced as the runner-up and third place winners, respectively.

The Wild Equity Institute unites the grassroots conservation and environmental justice movements in shared campaigns that redress inequity, both across our human communities and towards the lands in which we live. Special thanks to Barbara Beth, John Bowie, and Courtney Rose Rump for helping reach Patagonia’s customers during our two days of tabling at the San Francisco store.